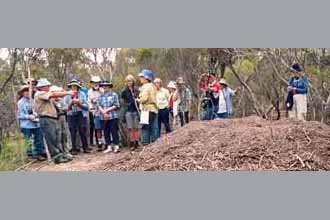 The Spring Campout of the South-east Australian Naturalists’ Association was held at Little Desert Lodge, Winiam, 30, 31 October and 1, 2 November 2004. The campout was hosted by the SEANA committee.
Meetings and excursions were held during the weekend.
Some of the excursions and excursion records included

Excursion to Nhill and the Big Desert
Excursion to Horeshoe Bend
Excursion to Kiata
The Malleefowl Enclosure
The Nature Trail at Winiam
Excursion to the Snape Reserve, Dimboola
Excursion to Tooan and Mitre
4 wheel drive guided tour
Trust for Nature – an address by Neil Marriott
Bird list for the campout
Bob Tate’s bird records
Some plants recorded during the campout

Mammals, reptiles, fungi and invertebrates were also of interest.
Some observations included:

There was a general scarcity of invertebrates, despite an abundance of blossom.
This is of concern and significance for the ecology and survival of humans.

Ants were the predominant insects. They were under rocks and fallen timber.
Meat ants build a gravel mound. The gravel is of uniform size, and gives protection
from rain and insulates from heat and cold.

Only one good specimen of fungi (Gymnophilus pampeanus) was observed.