The Snape Reserve is a Trust for Nature property that borders the Little Desert National Park near Dimboola. The 750 hectare property was purchased in 2002 and is named in honour of Diana and Brian Snape (Trust Chairman for 10 years). In the 2 years since destocking, natural regeneration has begun and some areas have been replanted. Field naturalists were impressed by the amazing diversity. The reserve has at least 12 Ecological Vegetation Classes (compared with 3 in the adjoining area of the Little Desert National Park). Some of the EVC’s are:

On our short visit we were able to walk through several EVC’s and observe the subtle changes in soil type while moving between communities.

The bird life was interesting and varied. A male Mistletoe Bird calling in the Yellow Gums above the group interrupted Neil’s introduction to the reserve. Hooded Robins blended with the dead limb on which they perched. Splashes of colour were added by Rainbow Bee-eaters, Eastern Rosellas and Diamond Firetails. The highlight was the Southern Scrub-robin, a new bird for several people, which Neil whistled up.

Several observations of insects were memorable. Jewel Beetles were found among the flowers of the Heath Tea-tree. Why had ants collected piles of yellow guinea-flower petals? Small black ants had built high mounds around the entrance to their nests which were also surrounded by several species of grass growing from collected seed.

One swamp had a base of crumbly soil rich in gypsum. Neil collected several plants not previously seen on the reserve. Green algae were growing on the recently dried mud.

The colour of the mistletoe growing on Buloke blended with the tree’s branchlets. Useful ways of distinguishing the mistletoe were that the cylindrical mistletoe leaves are erect compared to the drooping branchlets of the host and to look for the lump where mistletoe joined its host. 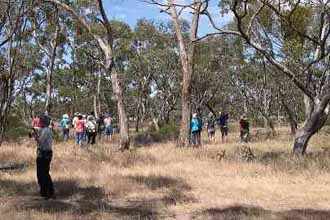 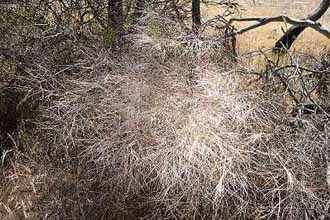