Leader Dick Southcombe. 30 October, 2004
Seven cars left Little Desert Nature Lodge at 9 am and headed south down the Nhill-Gymbowen Road and turned left into Nurcoung-Mitre Road. In the distance we could see Mt Arapiles rising sheer above the plain. To the left was Mitre Rock, shaped like a bishop’s mitre. We left the township of Mitre and were soon in the bush again. Quite a lot of things were flowering, especially the everlastings which were everywhere. We watched a goanna, about 4 metres up the trunk of a big eucalypt. His tail was strangely marked.

About a kilometre further on we stopped to admire the red berries of a Quandong. Further on we passed through areas of native cypress-pine and Silver Banksia. It was interesting looking at the Ouch bush a.k.a. Barb-wire Bush or Daviesia.

We ate our lunch in the lovely garden of Rod and Barbara Sutherland. They have a mixture of native plants (some from Western Australia) and exotic trees and shrubs. Around the water hole there were Red Gums. Rod and Barbara have recorded 180 different species of birds visiting over the years.

After lunch we drove to the monumment erected in 1935 to the three Duff children, who survived nine days alone in the bush in 1864. Another monument nearby commemorates one of the blacktrackers who found the children. He went on to play in the first test cricket team to go to England.

On the way home we drove through wonderful patches of Fringe-myrtle – it was flowering at its peak. 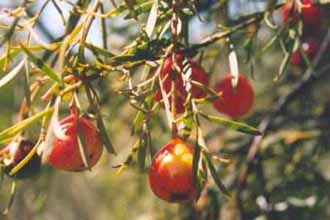 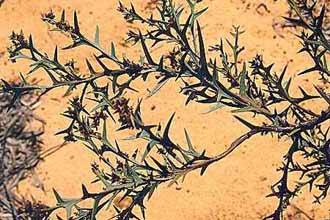