A convoy of 13 vehicles with 35 people aboard left for Kiata via Winiam East Road. Mary, who has been helping with an orchid count in the area, concentrating particularly on Spider Orchids, met us at the Sanctuary picnic ground. She warned us we were a month to late and most of the orchids had finished flowering, although we saw two of the greencomb group later on.

The first thing to catch most eyes before we set off on the track, was a lovely patch of Feather Spear-grass, backlit with the sun shining through. There was lots of Wallowa with masses of green pods. The seeds are one of the favourite foods of the Mallee Fowl. An old nest which had been used for some 30 years is to the side of the walking track. Two of the common trees of the reserve are Sandplains Stringybark and Oyster Bay Pine.

We found at least three different Goodenias, a couple of Hakeas, Nodding Chocolate-lilies, Golden Pennants, Daphne Heath, Heath Tea-tree, some showy patches of Calytrix, and some Violet Honey-myrtle, which is a realy lovely plant, growing near the picnic area. One of the special plants is the Hairy-pod Wattle, which is found in only a few areas.

When we arrived back at the shelter two Stumpy-tails felt were intruding and headed off in different directions.

The next stop was the Kiata Flora Reserve where fences have been put around some of the orchids, to keep rabbits out. Mary is not sure that this is he right way to go. The fences also keep out lizards. It would be better to deal with the rabbits directly.

From here we drove to the Kiata Camping Ground. There were many plants of Violet Honey-myrtle along the road, as well as Heath Tea-tree and Golden Pennants. We arrived at the camping ground at 12.30 and soon had our lunch in what little patches of shade we could find. The day was very hot and windy. We sat for a while after lunch just chatting, and then gathered together again at the start of the walk.

The first half is through Red Gum woodland and then back through Black Box flats. There was still no water evident but there were many birds. The line of walkers strung out as more birds were added to the list, and the last walkers took an extra 45 minutes to complete the walk along the Red Gum trail.

The number of plants in flower, and even looking green, and managing to thrive always amazes me. What a tough and subtlly beautiful flora we have in this country. 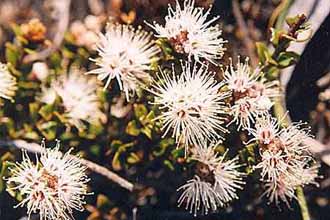 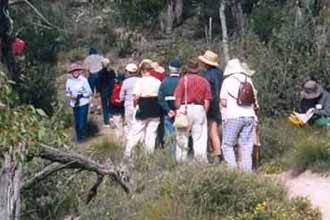 Near the start of Red Gum Track at the Camping ground.