There was lots of laughter and chatter as we clambered into the back of the 4WD – squashed up to make room for more people. Bird life was evident immediately – an Emu in the long grass, Black-tailed Native-hens near the water-hole, Superb Fairy-wren on the picnic table, and a Noisy Miner. The history of the water-hole with a spring was quite fascinating with anecdotal tales of the building of the island and its use for weddings. The gums are coming into bloom. A large fenced-off area is the new bush garden. One of the major problems is the tall, pink-flowered Veldt Grass from South Africa, planted by farmers for sheep grazing. However the 11 hectares is now re-vegetated with local seed and has lush growth where there was once mostly Evening Primrose.

Off the road and into the scrub of the central section of the Little Desert National Park. The National Park has 671 species of flowering plants. Silky Tea-tree was in flower – mostly white but some quite pink; Common Fringe-myrtle showed in pink patches. White-fronted Chats on the fence and Yellow-rumped Thornbills on the ground. A Shingle-back Lizard crossed the track. The sandy track rose to an area covered by buckshot gravel then back to sand – all ancient sea-beds.

Nhill area was a training ground for pilots during World War II. Two remaining concrete pill-boxes were eventually used for target practice. Whimpey told us many interesting tales of the early settlers burning scrub without getting caught. Changes in vegetation reflect changes in soil type.

Cherry Ballart is a root parasite which will eventually its host in this area. Stopped to look more closely at wildflowers including Golden Pennant, Guinea Flower, Blue Sun-orchid, Grooved Dampiera, and Fringed Heath-myrtle which had finished flowering and displayed its mulberry coloured sepals. Where the track joined the Old Nhill Rd, the billy was boiled over a fire of twigs. We strolled along the Old Nhill Rd, going south, until the 4WDs picked us up. Further along was a Quandong, Scarlet Mint-bush, Violet Honey-myrtle which was actually a cerise colour, and Barbed-wire Bush. Grey and Black Box grew in a swampy area but we did not see any crocodiles despite Whimpey’s tales.

Whimpey’s Track was put in by hand one very hot summer by Whimpey and his helpers. We stopped to listen to a Golden Whistler. The rare Sour-bush with little green seed-pods which are taken by Spiny-cheeked Honeyeaters to feed their young.

During another walk up the a sandy rise we found the red flowers of Variable Prickly Grevillea and Golden Woolly-pea. The taller plants along the track were very chummy, clutching at the vehicles as we drove through. During the final walk before lunch we saw gardens of flowers – pink, yellow and white. After lunch, a make- your-own sandwich, we walked until they picked us up once more.

Dwarf Sheoke formed a ground cover over a large area and suddenly grass trees raised their spiky heads above the undulating sheoke tops.

Our final walk ended beside a clump of brilliant Blue Tinsel-lily. A rough ride, dipping and swaying, took us back to the main road and north to Little Desert Lodge. As we drove back a large orange feral cat raced across the road and disappeared into the scrub.

During the day we walked over sandy tracks, saw many beautiful wildflowers, and were entertained with the stories Whimpey told. The latter revealed just how close Victoria came to losing the area known as The Little Desert. 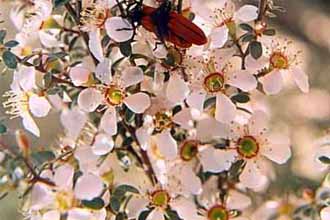 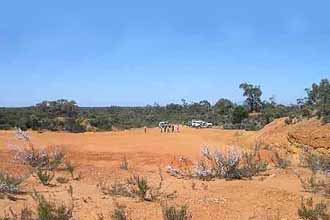 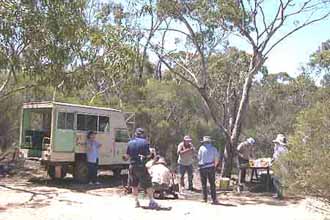 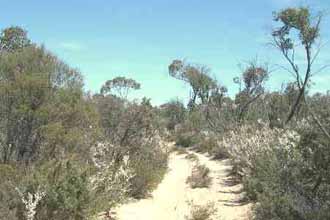