As we approached the sanctuary a group of Yellow-tailed Black Cockatoos flew off over the paddocks. One ploughed paddock had chocolate coloured soil. Whimpey saw a Spotted Harrier fly over the road so we piled out of the cars to try to spot it, but all we picked up was a Crested Pigeon on the top of a distant dead tree.

Whimpey and Maureen bought the 117 hectare block in 1973 from the farmer who was clearing the land next door. A friend helped with the finance. The block has not been burnt in living memory. The block was securely fenced with a vermin proof electric fence. The fence is 5 kilometres and took 9 months to complete. Solar panels provide electricity and a computer in the office is linked so that the fence can be monitored at all times.

Malleefowl feed on the flowers and seeds of Wallowa wattle. Yellow Mallee was displaying its huge flowers. A dragonfly landed on Val’s hand. Barbed-wire Bush is aptly named

As we neared the nest Whimpey asked us to go in single file and to remain silent. Whimpey went ahead and persuaded Charlie to come to the nest. He used to have partner, Di, but she went her way with another male. It took Whimpey some years to quieten Charlie. To do so a dummy of Whimpey was made and left near the nest, gradually moving it closer and closer. The new female wandered past and Charlie moved away.

Whimpey is the only person who has a licence to breed Malleefowl. Whimpey has spent many hours researching and documenting Malleefowl activities. There are 3 working mounds on the property. Malleefowls’ ability to control the mound temperature is quite amazing, as they use the dirt and litter to incubate the eggs. On the nest we were shown gauges to record the egg chamber’s temperature and humidity. Inside it is very damp – a vital necessity for both incubation and the chick’s need of a damp shell at hatching. Malleefowl are the only megapodes that live and work outside of the tropics. They usually take over an old nest rather than start a new one, but they will do so if necessary. Some of the nests are over 100 years old. Whimpey knows when rough weather is coming as they put heavier sticks on the nest to stop sand blowing away.

We were shown Whipstick Westringia, a rare desert plant with pretty little pink flowers. A Spotted Pardalote was calling as we walked back to the cars.

We drove to the far gate and a Willie Wagtail whistled at us as we walked down the inside of the fence. Again we were silent as Whimpey went into the nest, then called us to see Di and Romeo 2. He was on top of the nest, busily scraping dirt into the centre of the mound. Whimpey worked in opposition to uncover the deep pink egg which had only just been laid. Romeo 2 gave up in disgust so we had an opportunity to view the egg. Once we moved away, Romeo 2 returned and again began to scrape energetically to cover the egg. Di was pecking at grain Whimpey had thrown down, still recovering from her egg-laying effort. On our way back to the gate, sharp eyes espied a Purple-crowned Lorikeet sitting in a tree and a Golden Whistler serenaded us. A Stumpy-tailed Lizard glared at us as it curled against the fence, the barrier that prevented it escaping from us. Whimpey showed us the mound that Di shared with Romeo 1, then took us on to where they had put in a bore for water. The water is 445 feet down and they had to go through ironstone, with a final layer of coral, before breaking into a cave where there was good quality water. It is said that it comes originally from New Guinea!

Whimpey told us many stories of the hours he has spent patiently gathering information and developing the birds’ trust. It was a wonderful experience and we were fortunate to be able to have him share his knowledge with us as well as see the birds in action. Whimpey’s enthusiasm for this part of his “family” was great to see.

One of the amazing facts we learnt about the Malleefowl is how they put in all that labour without recognizing the results. If they see the chicks, they will drive them away. When the chicks hatch, they have full plumage, can flutter into trees and are fully independent. All knowledge for their future is already built into them.

As we drove to Horseshoe Bend a flock of Red-rumped Parrots, some brilliantly coloured, flew across the road while a solitary Masked Lapwing strutted along the edge. 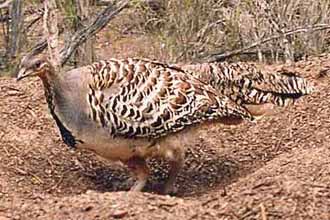 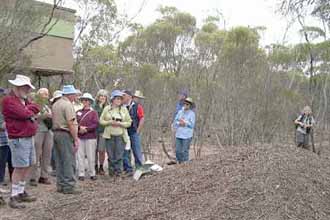 At the Malleefowl nest.