Site 1: Sun Moth Block. Our meeting place was at the newly built boardwalk, just north of the railway line at Nhill.
We had 23 participants. This site is one of 5 populations in Victoria, for the Golden Sun Moth, which is an endangered species. The 4 other sites are Mt Piper near Broadford, Salisbury, Flowerdale (Melbourne-Yea Rd) and
Dunkeld. It is also present in ACT and NSW where it is endangered as well. All populations are isolated and small. Fabian Douglas is investigating the biology of these moths for his Ph.D.

The Golden Sun Moth Synemon plana is bronze coloured. It is a day-time flying moth with clubbed antennae. The hind wing of males is dark brown and grey. Females have bright orange hind wings with black spots. Adult males have a 34mm wing span, females 31mm. The Golden Sun Moth is thought to have a two-year life cycle spending most of its life underground as a larva feeding on the roots of wallaby grasses. Adults emerge in November-December over a 6-week period. Adults are active only in sunny conditions between 11am and 2pm. Males fly rapidly about 1 metre above the ground searching the short swards of wallaby grass for the bright orange flash of the female hind wings.
Females are not very mobile, almost walking from tussock to tussock to lay eggs. The adult Golden Sun Moths do not have mouthparts, so are unable to feed or drink. They survive on stored energy reserves. They often starve to death 4 days after emerging. Threats are degradation of habitat with urban development, invasion by weeds which has reduced the cover of wallaby grasses, and agricultural development with crops. The Salisbury and Mt Piper populations are protected in reserves but fires are the chief risk to them. Grassland, especially native grasslands must be conserved to protect not only Golden Sun Moth but other moth and butterfly species as well as lizards, dragons, bandicoots and orchids.

Site 2: Hamlyns Reserve. The reserve is named after local farmers across the main road. It is noted for its Quandong population as well as Yellow Gum, Grey Box, Black Box and Slender Cypress-pine. The fruits of Quandong are excellent for jam making.

Twenty seven directional trunk leans and canopy flexing gave a prevailing directional mode of 255o for the reserve. WSW to ENE winds have the strongest effect on the trees at Hamlyn Reserve.

Site 4: Hermans Hill Nature Trail and Lookout.
The feature here was the nature trail through this section of the Big Desert. This was made possible by a DSE grant to build a 1.3km nature trail. Landcare Environmental Action Program contributed $14,500. The Nhill College Environment Cadets provided much of the signage, framing and helped construct the lookout which gives an excellent 360o view of the surrounds. The work won them a junior landcare award. Features of the work are the references on the nature trail to the broom bushes – Broombush and Baeckea Broombush. Reference is also made to Flame Heath, Scarlet Mint-bush. Dodder Laurel, Slender Cypress Pine, quandongs, orchids and banksias.

Ant heaps show the ridges are built up with yellow Parilla Sand (400,000 years ago) now covered by whitish-grey Lowan Sand. The NNW-SSE ridges represent stranded beaches formed when the sea retreated to the southwest 2 to 4 million years ago and is still going on in the Coorong, South Australia.

From fallen eucalypts and broken branches, the prevailing winds were strongly from WNW with minor modes from the east and NW. The NW winds dominate before a change preceded by easterlies. When the front passes through the winds then swing westerly and southwesterly.

Site 5: Lake Hindmarsh – North Shore. The lake floor reminds one of Lake Mungo in NSW. It has not had water in it since 1996. Loss of water by evaporation accounts for 95% of the flow. In good seasons the Wimmera River would fill the lake, together with Lake Albacutya, but now too much water is diverted for urban and agricultural use. The magnificent Red Gums around the lake are dying. It is proposed to replace the open channels
used to fill dams in the Wimmera and Mallee with a pipeline system. The water saved will increase the environmental flow of the Wimmera River.

Site 6: Glenlee Reserve. This was a quick visit and we didn’t really do it justice. Bluebells were common among the understorey. Leaning trees and upper canopy suggests that southerly and southwesterlies were the damaging winds. Northerly, especially NW winds were in evidence but less prominent.

At this stage some of the party returned via Nhill Sewage Ponds, others via Kiata to the Little Desert Lodge. Before leaving Clive was thanked for his commentary and selection of sites. He also made us realise that much can be done towards conservation by education through pamphlets and nature trails. The involvement of youth towards this end via Nhill College Environmental Cadets was commendable. Through their efforts funding has been made available to help with education, management and conservation.

The Big Desert stretches for many kilometers north of
Hermans Hill. 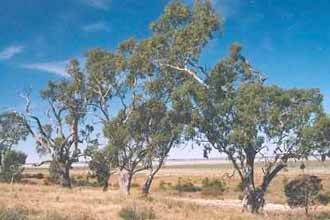