From the camping area at Horseshoe Bend we moved further downstream along the Wimmera River which, although not flowing was well filled with water because of the dams lower down. Parking was opposite a native walk trail.

The first half hour was spent along the riverside among the River Red Gums and Black Box trees growing on the edge of the river silts. Over the road sand replaced the silt.

The river bank was dominated by Totem Poles. Smaller plants included Groundsel, Black-anther Flax-lily, and Bluebells, and to our delight, Round-leaf Wilsonia, which Neil Marriott had found at the Snape Reserve that morning. We also found Bulbine Lilies, Blackwood Wattle, Eutaxia, and a Wallaby Grass.

Over the road and on the sandier soils we identified Silky Guinea-flower and more Bluebells, some of which were small in both size and flower size. Common Rice-flower, Silver and Desert Banksias, two Guinea-flowers, Scarlet Bottlebrush, Heath Tea-tree and Clematis were also seen during the morning.

There were also small patches of Noonflower and numerous clumps of Daphne Heath, many past their prime. Regretfully, we could not identify the grasses. Further search found Variable Plantain, Guinea-flowers and Bulbine Lilies, as well as Wallaby Grasses not yet in flower.

The bird enthusiasts had more luck with positive identification. 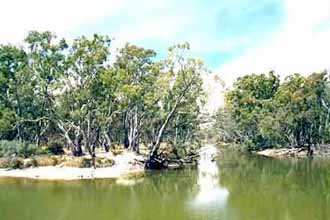 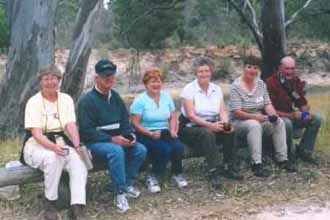