The SEANA Campout at Mallacoota

Day 1 – Gypsy Point and Miners Track. The two-day trip, via the mountains, not the city, was well worth it. Our time was full of interest, from birding at Gypsy Point, surrounded for much of the walk by the sound of Bell Miners, watching White-bellied Sea Eagles and Caspian Terns fishing, or tiny brown birds hunting insects near a log – never did find out what they were – to walking down the cleared power-line track off miners track surrounded by a sea of blue Patersonias, the Native Flag, and finding orchids, boronias, fascinating sedges and a dainty little pea, which I finally found was the Leafless Globe-pea, hidden among them – and that was only the first day. The bird list I made for the morning at Gypsy Point came to 42, but I suspect some of the others had a more impressive list than that!

Day 2 – the coast. Our second morning was spent in the Old Coast Road- Shipwreck Creek area. We walked through coastal forest, which was predominantly Bloodwoods, and out onto coastal heathlands. There were lots of different peas, including a taller form of the Handsome Flat-pea, which we find near Castlemaine as an almost prostrate plant, and a pale flowered Gompholobium.

I didn’t see a lot of birds, but a Yellow Robin and Grey Fantails were soon seen as we started down the track. As we didn’t have a local guide our leader from the Sale Club dubbed it a discovery walk, and we soon strung out along the length of the track, from those who didn’t go far from the cars because they were birding and finding orchids near there, to those of us who walked right down to the heathland, going from a forest where there was little understorey, other than scattered herbs and orchids and ferns, to a crowded “understorey” and only a few clumps of Melaleucas, Callistemons and stunted Eucalypts.

We had a free afternoon, and as we’d taken lunch with us, we returned, after dropping our passenger off, to a hidden picnic area on the Betka River, and had picnic lunch accompanied by Silvereyes, Honeyeaters and Whipbirds.

That evening we had our meal at the club with the rest of the group, and later were treated to a most interesting talk and slide presentation by an expert ornithologist, Dr David Hollands, a medico from Orbost, who has travelled to many parts of the world photographing owls.

Day 3 – Lake cruise. The next day, Monday, was another early start as we joined the little M.V. Loch Ard for a four-hour trip around various arms of the Mallacoota Inlet. Captain Bob was a very knowledgeable fellow and kept up a commentary on the history of the area, its settlement, characters and fishing history (by the way, an abalone licence that cost just $2 in 1960 will cost you $7 million today!).

As we left the Jetty, Bob pointed out the small colony of pelicans on the little island opposite, telling us that they were the geriatrics which were no longer breeding, and were now looking to be fed when any fishing boats came in and cleaned their catch. Later in the morning we could see the other part of the colony, along with hundreds of Black Swans, many with cygnets, out on the Goodwin Sands.

As we motored gently along we wound in and out of bays, and I could well understand that fishermen every so often have to make radio or mobile phone contact to find out how to get back to Mallacoota! When we were in the Twin Creeks area we found ourselves among hundreds of jellyfish which come into the inlet to breed, and leave again once they are about twenty centimetres across. Once when the sandbar blocked the outlet to the sea there were some huge ones trapped in the lakes system.

We landed on one of the small jetties where we were given morning tea and a chance to stretch our legs before heading back, but not before going across the arm to inspect Fairhaven, one of the oldest properties on the lakes. We were back by 11.30am. If we had been much longer the wind would have got up, and the inlet, being very shallow, can suddenly whip up short steep waves, which are not very pleasant to be caught out in, though there are places where boats can go in to shelter.

Our afternoon was spent doing the Pittosporum walk from the park in the town, through littoral forest and down onto the beach to Bastion Point. A number of Bar-tailed Godwits and Pied Oystercatchers were among the birds seen on that walk.

Day 4 – Whales at Eden. On Tuesday Doug and I decided not to join the group going to Marlo as we would be heading home that way the next day. Instead drove up to Eden to have a look around, and found ourselves up at the lookout – and three Humpback Whales were in the bay, so that was a thrill for us both. 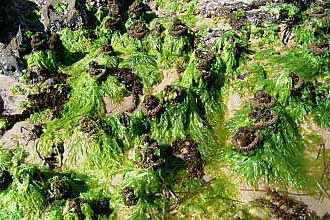