The South East Australian Naturalists Association (SEANA) Spring Campout was held during the weekend of October 14th and 15th hosted by the Maryborough Field Naturalists. Ballarat was represented by Elaine and John Gregurke, Peter and Claire Dalman and Les Hanrahan. A few others had intended going but were unable. In total about 90 participants attended from across Victoria. The weather was kind after a few unseasonably hot days just prior to the camp. Rain had been forecast but all we saw were just enough drops to make dirty smears on dusty cars. Nobody would have minded a downpour. Everywhere we went the bush was dry and crunchy but being field nats we still found plenty to interest us.

A choice of four excursions was offered, most people choosing two on Saturday and one on Sunday morning, with lunch each day at Maryborough’s comfortable club rooms. Parks Victoria rangers Rob Brouwers and Samantha Nester led Saturday trips to Paddy’s ranges National Park. On a mini bus we drove along tracks and learned about park management techniques, particularly thinning of trees on several areas to enable remaining trees to grow better. Differing treatments are being trialled in different places and are being monitored to assess effectiveness. Sometimes trees are felled and left in situ, sometimes felled trees are removed in differing percentages.

Fenced enclosure. We also visited an area of bush fenced off since the 1950s to exclude rabbits and discourage kangaroos and wallabies. The “block” is about 5 acres and a walk from the car park. Vegetation within the fence was thicker and taller than that outside and we noticed a few plants there that were not seen elsewhere – fairy wax and correa and a lonely wahlenbergia. A stand of young cherry ballarts was obvious. The drought and recent hot, windy days meant that flowers were poor or not present. We did see a Diggers Speedwell (Derwentia perfoliata) which had us guessing about its identity.

Havelock Forest. Garry Cheers led us to a bush patch at the Havelock Nature Conservation Reserve where we stopped at the intersection of Simpsons and United Kingdom Tracks to see a gentle “hill” which was different to close bush. Garry called it “Hillcrest herb rich woodland”. The reserve was a high priority swift parrot site and these birds had been seen there every year except one in the last ten. Here, as elsewhere, plants were suffering but birds were all about and calls were pleasant. We had a good look at a rufous whistler and female mistletoe bird and weebills flew about. Other birds we heard or saw included the melodious oriole, black chinned honeyeater, striated pardalote and brown headed honeyeater. Plants seen included convovulous, eutaxia, nodding saltbush and a few pimeleas. After a while we decided the dry bush had revealed its treasures and we moved to the sewerage settling ponds to see more birds and this was worthwhile. The ponds supported large numbers of water birds. A particular highlight was a good look at a beautiful diamond firetail.

Evening Meeting.On Saturday evening at the Annual General Meeting retiring members of the SEANA Committee were re-elected with the consequence that the executive will continue with the same people. The general meeting approved the distribution of surplus funds from the Australian Naturalists Network tour to conservation organisations. Discussion took place about locations of future campouts. The Maryborough Club provided each attending club with a copy of their book titled “Fifty Golden Years”. The club has been very active in conservation and the book outlined many of their achievements. Well done Maryborough.

The evening address was delivered by Gary Cheers. He initially talked about how offsets worked when developers wanted to remove vegetation, explaining how the ‘quality’ of the vegetation was taken into account and how an offset could be achieved by improving poor, grazed land with trees on it. He gave an example of how removing 20ha of vegetation might require 300ha as an offset and explained how developers were required to improve and maintain an offset area for 10 years. The majority of his presentation was on different Ecological Vegetation Classes (EVCs) and he outlined the nature of some of the 957 EVCs with a leaning towards those associated with and close to box iron bark forests. Box ironbark should have about 120 trees per hectare with 20 very big ones, but harvesting and regrowth has meant this is now 800 or more. Shrub cover should be 30% but in many areas was lucky to be 5%. Other EVCs described included Grassy woodland, Heathy woodland, Heathy dry forest, Grassy valley forest, Shrubby woodland, Mallee, Sandstone ridge shrubland, and Hill herb rich woodland. For each of these the typical percentages of large trees and shrubs was given and pictures of typical plants provided.

Rock Wells. On Sunday we went with Maryborough club member Kathy Webb to Bull Gully Rock Wells and Battery Dam. The aboriginal wells at Bull Gully were fenced and protected at the instigation of the Maryborough club in 1958. The wells comprise five holes about 60cm by 20 cm with hollows underneath being up to 137cm in length and in some cases adjoining underneath. In all they hold just over 168 litres of water. The location is reputed to be an overnight stopping place when aborigines moved. Rocks were placed on top of the openings to protect the precious water. Battery Dam was an interesting gold mining and eucalyptus distillery site with much evidence of these operations clearly visible. Explanatory signs were useful. Added interest at this location was a yellow-tufted honeyeater building its nest only a few inches above the ground and clearly visible making many visits bringing small feathers and other material to line the nest.

Other excursions went to Timor or the Amherst Big Reef.

Despite the dry bush it was a very enjoyable weekend and the efforts and organisation of the Maryborough club were sincerely appreciated. The next camp is in the Otways at Forrest next March.

Claire and Peter Dalman. Reprinted from FNC of Ballarat newsletter. 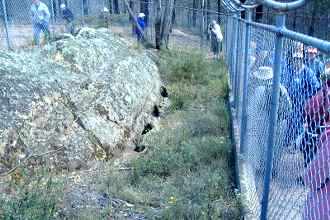