Naturalists went on excursions, led by local naturalists, to observe the plants, trees, birds, ants, geology and history of bushland areas around Ballarat.

At Lake Burrumbeet visitors watched several hundred pelicans feeding close to the southern shore. One thousand pelicans were seen on the lake. While walking through bushland near Haddon Scarlet Robins and Grey Fantails were seen.

During a bird walk around Lake Wendouree the visitors were delighted to see 38 species of birds including Musk Duck, Blue-billed Duck and Great Crested, Hoary-headed and Australasian Grebe.

Another bird watching group visited sites in the Creswick area where we usually find a variety of small migratory birds. As is often the case, several species expected to be seen were not sighted, presumably having departed on their long return flight north. Tawny Frogmouths with young had been sighted a few days before our excursion but these had also moved. We did see a Wedge-tailed Eagle, a variety of water birds, Rosellas and a Rufous Fantail.

One excursion looked at the types of ants in urban parks. Other excursions to Creswick, Scarsdale, Wombat Forest, Mt Buninyong, Macarthur Park showed visitors the diversity of habitat in the Ballarat area.

The buried rivers of gold around Creswick made for an interesting circuit with participants travelling through the impressive Kingston avenue of honour, past former mine sites and through volcanic plains, visiting the historic Monier bridge built by Sir John Monash at Lawrence and finishing at the Australasian Number 2 mine, the site of Australia’s worst gold mining disaster.

Visitors had the opportunity to visit the Ballarat botanic gardens to see the spectacular begonias and marvel at the great trees planted by our pioneers which included the enormous blue gum along the Gilles Street boundary.

On a 40 acre bush property of Club members at Scarsdale visitors enjoyed the resident birdlife on the wetland, a pair of Tawny Frogmouths, the local Enfield Grevillea, Grevillea bedggoodiana, and colonies of three incredibly small native orchids: Tiny Greenhoods, Parsons Bands and Bearded Midge Orchids in the Heathy Dry Woodland.

Gayle Osborne of the community group ‘Wombat Forestcare’ lead an excursion to Wombat Forest. Special features were areas of Sedgy Riparian Woodland and then a hill slope of Heathy Dry Forest. Yarra Gums were common across both areas, which tend to have large hollow, and we were entertained by a group of Gang-gang Cockatoos.

Research sites of a long-term study established in 1984 in the Wombat Forest to quantify the effects of spring versus autumn burning and fire frequency on flora, fauna, invertebrates, tree growth, soil fertility and fuel levels. We were led by Dr Kevin Tolhurst of the University of Melbourne’s Creswick Campus, who’s knowledge of fire ecology was an inspiration to us all, and highlighted the importance of research in this area. One plot visited had not been burned for over 70 years, while others have been burned seven times in the past 30 years. The results are vital for our understanding of fire management, yet maintenance of funding for long term research is under constant threat.

Visitors walked the La Gerche Trail, a 2.2 km circuit under towering specimens of 120 year old pines, oaks and other exotic and some native species. The trail commemorates the life of John La Gerche (1845-1914) who worked with other forest bailiffs to control the rampant cutting of the Ballarat-Creswick Forest for mining and other timber. La Gerche also established a plant nursery and Sawpit Gully and trails of tree species for regeneration of mined areas, which now has Victorian Heritage Status. The Field Naturalists Club of Ballarat is involved with Parks Victoria in a project to re-sign the La Gerche Track, which will be completed in 2015.

On Friday night after dinner speaker, Emily Noble of Field Naturalists’ Club of Ballarat, showed images of a range of trees, orchids, birds, ants and flies found in the area.

On Saturday night, Martin Scuffins spoke on the care of injured birds of prey and enthralled the audience by feeding a Barn Owl. Martin brought in a Barn Owl to illustrate his comments about raptors, thrilling the audience as the bird enjoyed being fed. 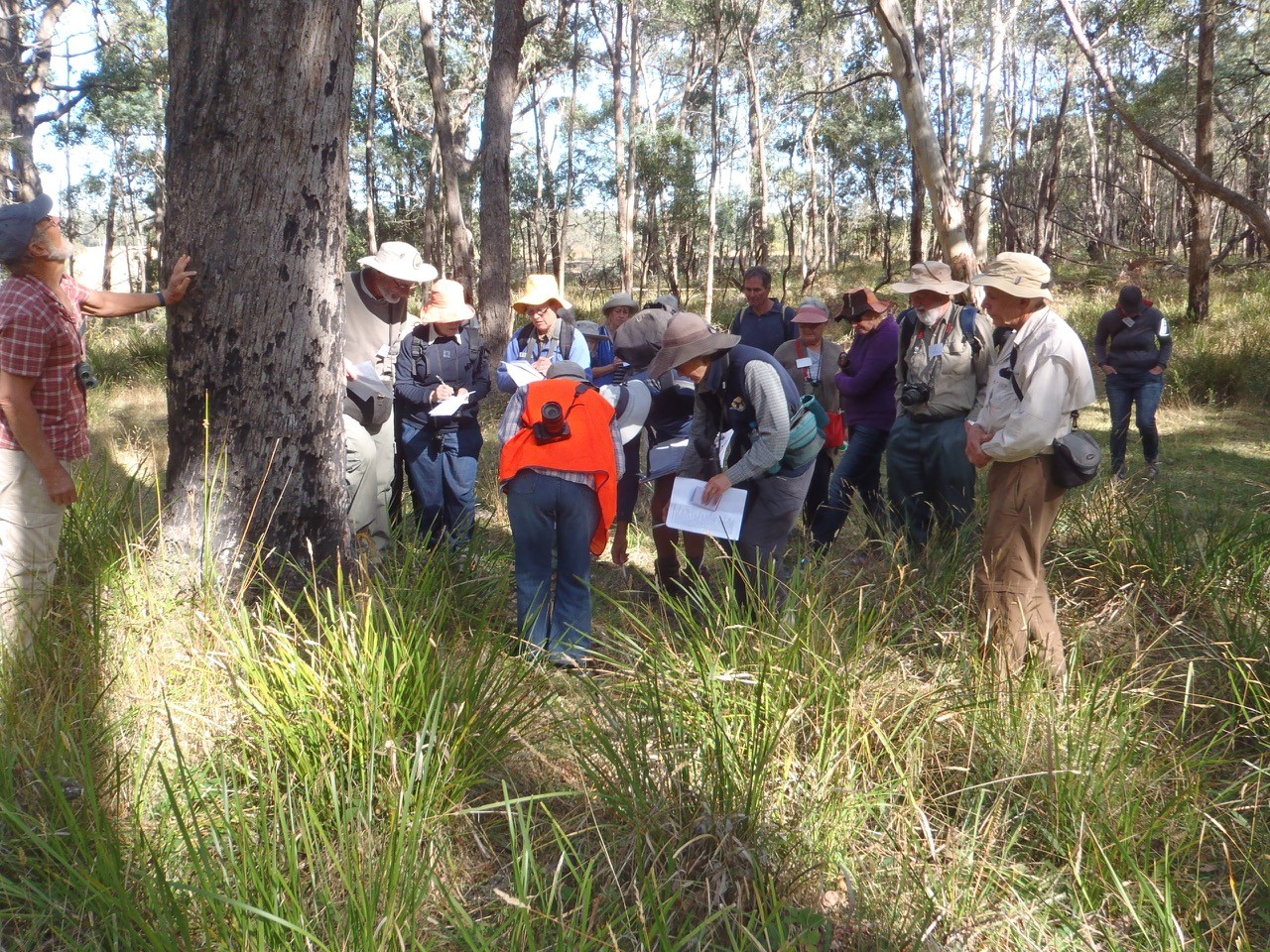 Field Naturalists looking at some herbaceous species in a moist sedge dominated area under Yarra Gum and other
Eucalypts. 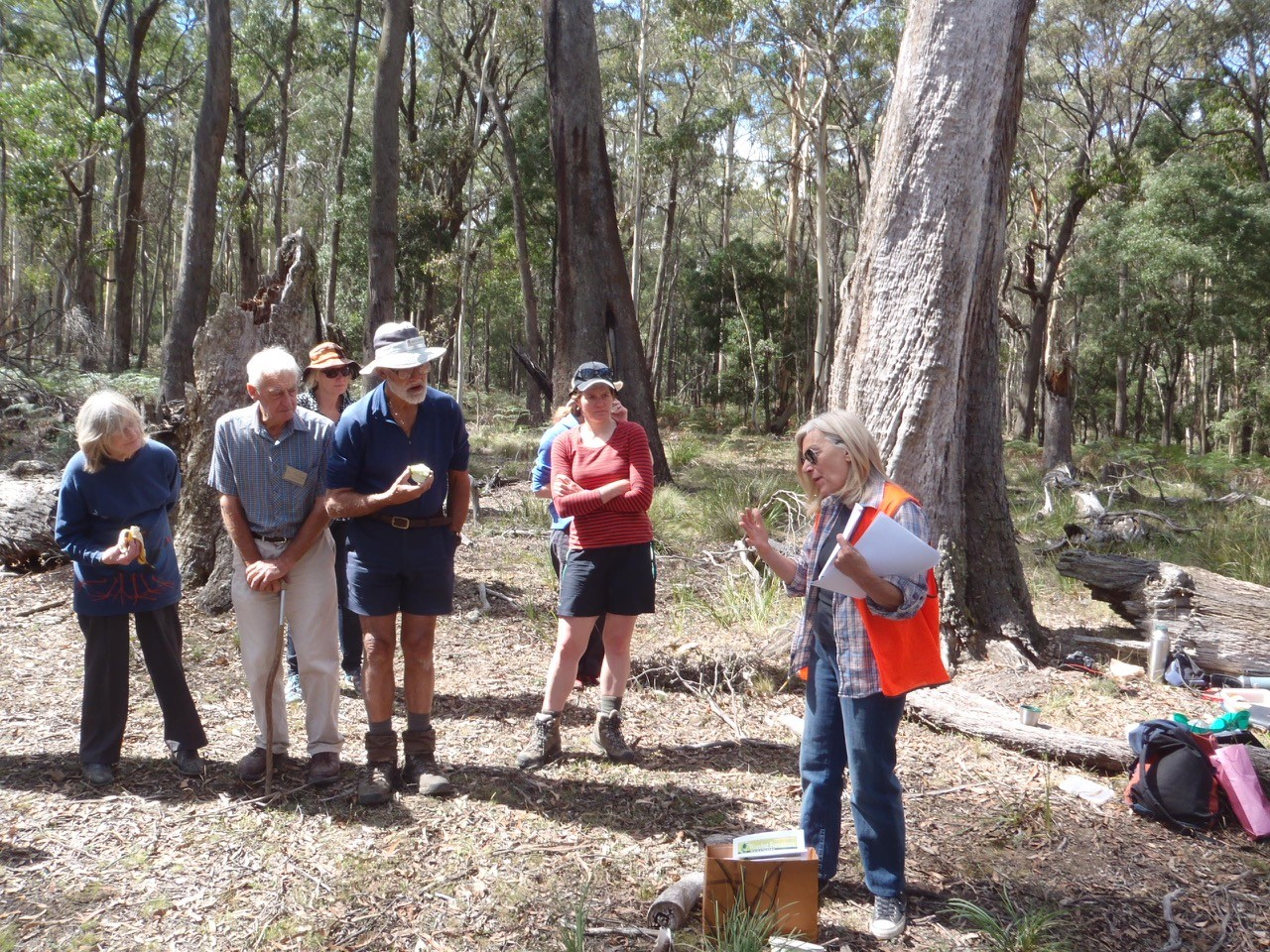 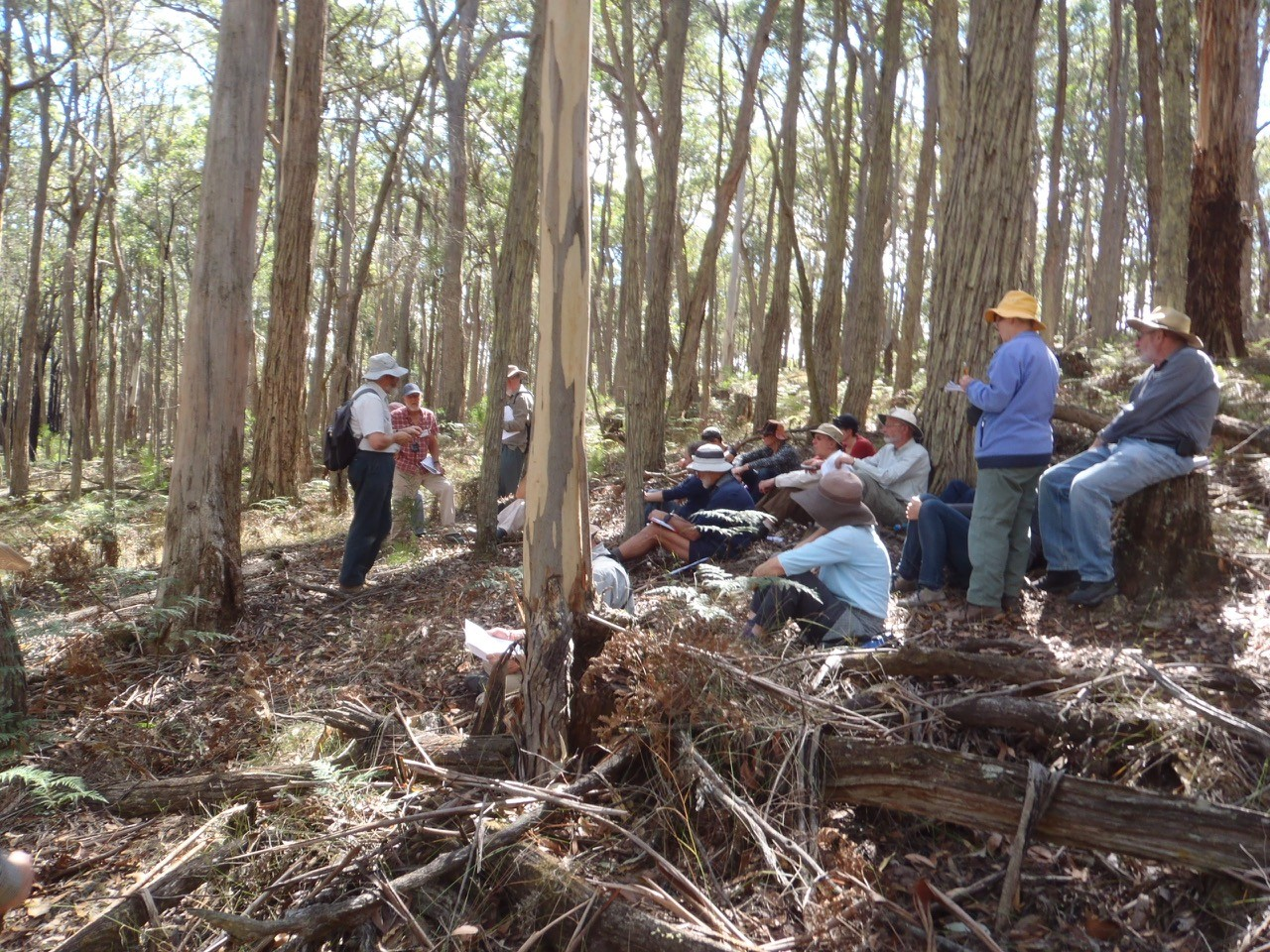 Dr Kevin Tolhurst of University of Melbourne CReswick Campus (School of Forest and Ecosystems Science), explains
aspects of the long term Fires Effects study near Blakeville in the Wombat Forest – to Field Naturalists attending the SEANA Camp based in Ballarat from 13-15 March 2015. This plot has not been burned for more than 70 years.