The whole-day excursion, conducted twice, visited the Kiata Flora Reserve, the Kiata Campground, and the Sanctuary Picnic Reserve featuring the Keith Hately Walk.  There were 17 people on Saturday and 20 on Sunday.

The excursion started each day with a little more than an hour at the Kiata Flora Reserve with a good number of orchids (dominated by Caladenia tensa and Thelymitra Alcockaea, but also with one good example of Caladenia lowanensis – the Wimmera Spider Orchid which has very limited distribution).  We then had a short stop on Reserve Road, where there was a very good stand of Spider Orchids (probably Caladenia tensa). We then moved on to the Kiata Campground for morning tea, followed the an hour-long search for birds which were abundant in the yellow gum – black box woodland.  There was also a good stand of Swainsona procumbens – the Broughton Pea.  After lunch and another short walk in the campground, highlighted by a number of different acacias, Eremophila gibbifolia and Prostanthera aspalathoides.  We then stopped twice along the Campground road to inspect spectacular displays of Golden Pennants, Calytrix tetragona , Micromyrtus ciliata, Blue Boronia (Boronia coerulescens subsp. coerulescens )and Violet Honey-myrtle (Melaleuca wilsonii).  The final walk was around the Sanctuary Picnic Ground where, on the Saturday some of saw a Mallee Fowl, while others had a good view of a group of White-winged Choughs attacking a large lace monitor – which appeared not too bothered by the attention.

As indicated in the lists we saw a large number of different plants and 43 bird species.  Most of the birds were seen at the Campground.

Animals sighted included stumpy-tail lizards, a wallaby, an echidna and large lace monitors at both the Campground and the Sanctuary area. 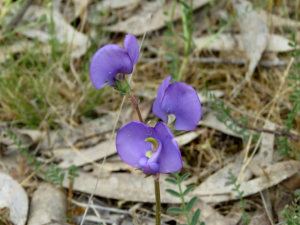 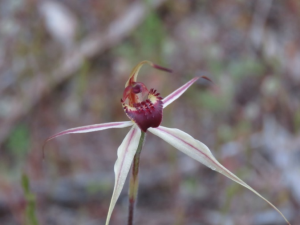 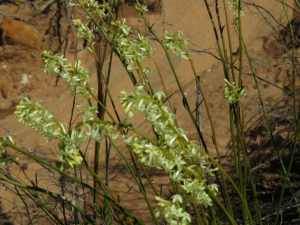 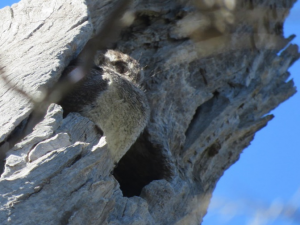