It is a pleasure to report, in my role as Working Party convenor, that the SEANA Autumn 2017 Camp held over the extended weekend of Friday 17th – Monday 20th March was a great success. Hosted jointly by the Sale & District FNC and Latrobe Valley FNC, 120 naturalists registered, making it one of the largest SEANA gatherings in recent years. They were drawn from 15 member clubs from as far away as Portland, Donald and Albury-Wodonga. The camp base was The Laurels function centre at Sale Racecourse, which proved to be an excellent, attractive venue with plenty of space for dinners, socialising, evening talks and displays.

Sale club member and talented nature photographer Ron Greer gave a presentation ‘Birds of the local area’ on Friday evening. His first set of photos was taken as recently as five days earlier, in Holey Plains State Park, and included a Collared Sparrow-Hawk whose arrival disturbed the fun of various Honeyeaters, Eastern Yellow Robin and Spotted Pardalote. Superb photos in various wetland locations around Sale followed. Ron enlivened his talk with some great anecdotes, including an unusual encounter between a Freckled Duck and a Eurasian Coot on Lake Guyatt back in 2012. The coot waddled past the duck, which appeared to take offence! Whatever the duck said, the coot didn’t take kindly and turned to the approaching duck. Ron’s brilliant photo sequence suggested that the coot won the ensuing altercation!

Our speaker on Saturday evening was Dr Kate Charlton-Robb, from Museum Victoria, on the subject of the Burrunan Dolphin, only recently classified as a distinct bottlenose dolphin species. Kate was the lead author of the scientific paper published in 2011 which formalised its naming as Tursiops australis and provided its description. She explained that its delineation as a new species was based on consideration of its skull size, external characteristics and DNA. T. australis has been sighted only off Victoria, Tasmania and South Australia, with just approximately 60 counted in the Gippsland Lakes area. Its long-term survival is thus of great concern.

Sunday night’s speaker, Don Love, also gave a talk ‘Citizen Science at Beware Reef’ with a focus on the Gippsland region. This reef, a Marine Sanctuary, lies 5 km to the south-east of Cape Conran and encompasses a series of underwater granite pinnacles with a small section at its northern extremity rising above sea level. Don is an experienced diver who, as a member of Friends of Beware Reef, has been studying and photographing its marine life for many years. To date approximately 100 fish species, 4 marine mammals, 40 sponges and more than 180 other invertebrates have been listed for the sanctuary. Don’s well illustrated presentation vividly conveyed the challenges of scientific survey work in such underwater environments.

A very popular display was the set of the 34 awarded exhibits from the Latrobe Valley club’s recent nature photography competition, open to members of the two host clubs. On Friday evening, the two medallions for “Best in Show” and “People’s Choice” were presented: the former medallion went to Ron Greer for his photo of a male White-fronted Chat and the latter to David Stickney for his ‘charismatic megafauna’ shot of a yawning Koala. Ken Harris (LVFNC) had prepared a Powerpoint show of the 96 leading images, but including at least one photo from each entrant, and this was screened as a loop on Sunday evening before and during dinner.

We thank Sally Court for bringing for display a large set of 3D natural world images created by her father Ron Court and Arthur Ewen, both late members of the LVFNC.

A range of books and brochures on display included the attractive booklet ‘Birds of the Sale Common Wetlands’ authored by Sale club members Ron Greer and Rosalind Steel and launched on Friday evening. It has been published with financial contributions from SEANA, FNCV and Gippsland Water.

A highly diverse range of twenty-two excursions had been programmed from Friday afternoon (at Dutson Downs environmental farm) through to Monday morning (at the Knob Reserve in Stratford, in Maffra and at the Heyfield Wetlands), concluding with lunch together at Heyfield

A camp highlight was a guided cruise on the Gippsland Lakes on Sunday as part of a bus-based excursion which also visited a Grevillea Garden at Nicholson. In cruising between Lakes Entrance and Metung via Reeve Channel, we were rewarded with close-range sightings of bottlenose dolphins and seals near the Entrance and with a diversity of birdlife.

Other sites visited across Saturday and Sunday included a number of wetlands and reserves in and around Sale, and to the north, the Avon Mt Hedrick Wilderness Area, the Mitchell River NP, Licola and the Wellington River valley, and Peach Flat Community Wetland near Briagolong. Holey Plains SP was visited, being the site of some rare and interesting plants, as were saltmarsh areas on the shores of Lake Reeve near Golden Beach.

Ken Harris conducted moth surveys each evening and welcomed those interested to join him following the evening talks. The sites included Sale Common on Friday night, the Herb Guyatt Reserve on Saturday and Holey Plains State Park on Sunday, the latter being particularly rewarding for Ken with the sighting of a Lacewing of special interest.

n concluding this report, my grateful thanks go to the members of the organising Working Party (five from each club) who worked well as a team, to all the excursion leaders and facilitators, and to all the other helpers whose efforts made for a successful event. 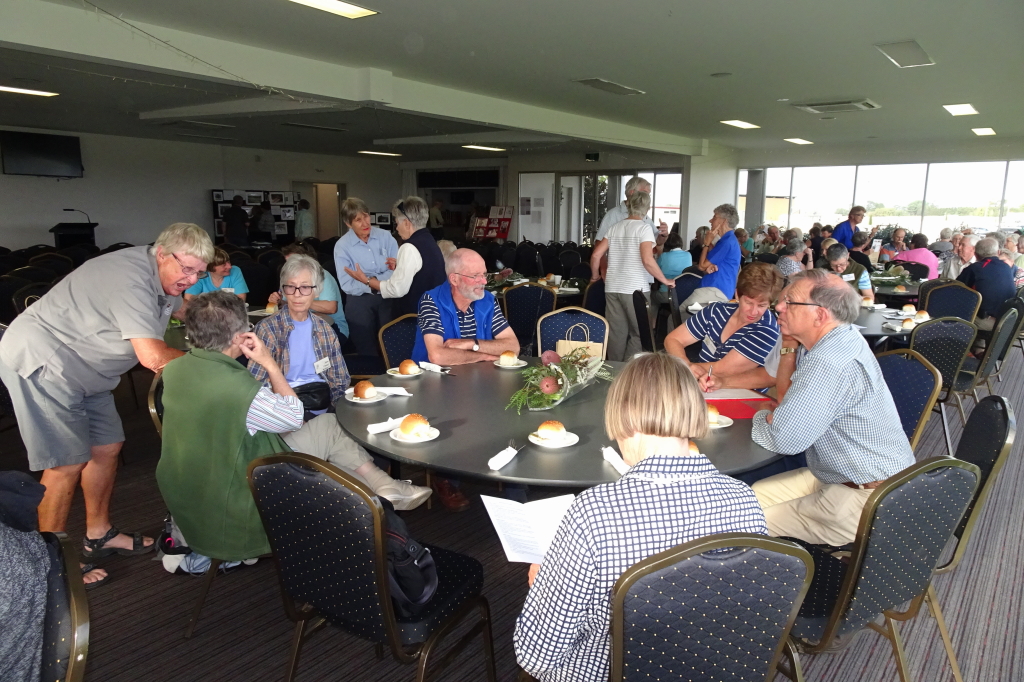 Sale 2017 Autumn Camp Group at dinner at The Laurels 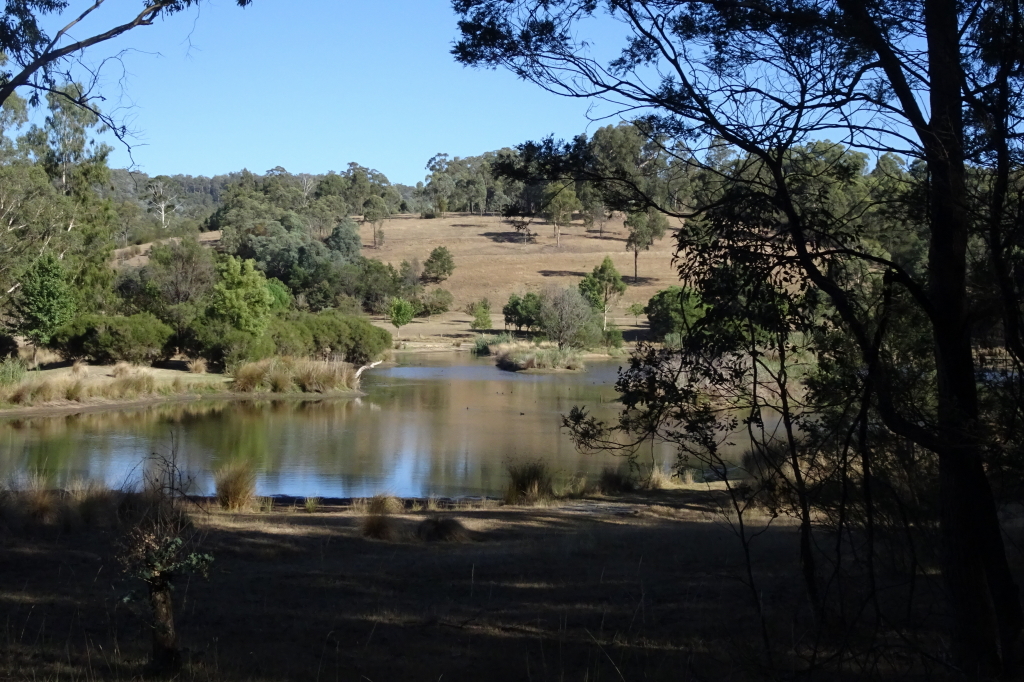