Twelve intrepid adventurers set off from Badger Creek Hall for an afternoon exploring the wilderness of the Great Dividing Range. We travelled via Don Road to Launching Place and then along the Warburton Highway. This gave us a spectacular view of the high country as we approached Warburton. We turned left onto the road to Donna Buang and wound our way uphill until we reached the carpark at Cement Creek. An acknowledgment of the traditional owners of this country was made at the commencement of the walk. We then ventured out along the skywalk and into the rainforest canopy where we could appreciate the size and age of the Mountain Ash (Eucalyptus regnans) and the Myrtle Beech (Nothofagus cunninghamii) from a vantage point 50 metres above the ground. Bird life was scarce and we entered the boardwalk down a flight of steps that everyone negotiated successfully. Here we examined the various species of ferns and bryophytes growing on trees and the forest floor. Species identified included:

Although water was flowing in the Cement Creek the dryness of the area was noticeable and this had had some effect on the diversity of the vegetation.

We completed the circuit and climbed back up the stairs to the cars, where some people took the opportunity of having refreshments. We then proceeded to the summit of Mt Donna Buang. Several people climbed the tower for 360 degree views of the surrounding ranges. Members of a large biker group who were there kindly pointed out some of the landmarks.

Since this was the excursion that travelled farthest from base, time was short and all too soon we had to return to the cars for the homeward trip. We stopped briefly at Ben Cairn to note the differences in plant species and as we drove through Don Gap we admired the Pink Bells (Tetratheca ciliata) in flower on the bank beside the road. We arrived back at the hall in good time for the evening programme. Thanks to David for acting as the “tail-end Charlie” and Ruth for providing a list of the identifications. 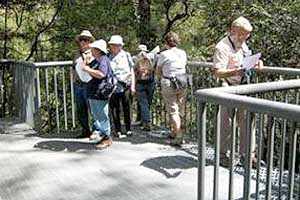