We took a walk into the past along a sandy track through towering Saw Banksias, Coast Manna Gums and Tree Broom-heath; we walked in the footsteps of the Kurnai people, the settlers of the Old Port and travellers from Shipping Point (Port Albert) to Old Port. Information was given about the wreck of the Clonmel, early explorer Angus McMillan, Nooramunga Marine and Coastal park, Ramsar status and the effects of mangroves and spartina.

Some folk birded, some took photographs, some found insects and all botanised. Finds of the walk (which managed to miss all squalls and was sheltered from the gale-force winds) were: 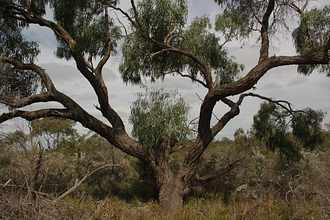