Location. The most accessible deposits are beside the Newstead -Creswick Road, where the road passes through the Strathlea Forest. The rounded stones and gravels contrast with the Ordovician strata that are exposed elsewhere.

The Permian tillites. The deposits are from the debris of glaciers that were at this location in Permian times, about a quarter of a billion years ago. Glacial deposits are called tillites, and are characterised
by gravels with a mixture of sizes. Some of the stones still have scratch marks, showing past abrasion. Often the material has been carried for great distances, and there may be no local bedrock matching the tillite.

The roadside exposure is only one of the local outcrops. Others are several hundred metres to the south. 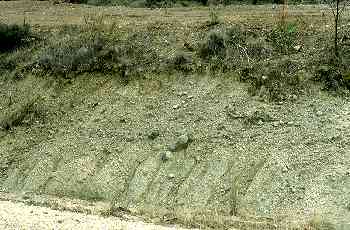 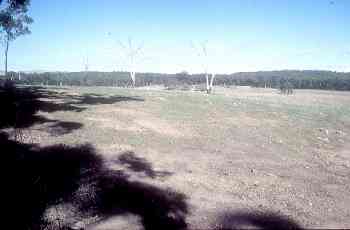 1: Tillite deposit in roadside cutting. The stones are rounded and of mixed sizes. This spot was once covered with ice. The moving ice river help abrade the rock. Scratch marks can
still be seen on some rocks.

2: Tillite is visible in the paddock. This site is a few hundred metres south of the road.

Other Permian deposits This is one of several glacial deposits in the district. Others are beside Upper Coliban Reservoir, and in the Heathcote and Lake Eppalock district.

Mass extinction.The Permian period was a time of extensive glaciation. The end of the Permian was marked by world-wide extinctions, when most of the plants and animals on Earth disappeared.

Ordovician Rocks are much older than the Permian, and date from nearly 450 million years ago. They were laid down as sediments in a shallow sea. Since then they have been compress, and the strata are often almost vertical. Quartz veins in the strata sometimes contain gold.