On both Saturday and Sunday an all-day excursion to Mt Arapiles was held.

Travelling from the Little Desert Lodge the convoy had their first stop at Mitre Rock.  A brief overview of the history, geology, vegetation types, flora and fauna of the Mt Arapiles-Tooan SP was provided here.  The purple of Prostanthera rotundifolia (Round-leaf Mint-bush)and the red of the Dodonaea viscosa (Sticky Hopbush) were colourful against the rock face.

As we turned into Centenary Park Rd, we stopped for a quick photographic opportunity of the north-east side of the mountain.  From here we drove to the Summit Picnic area.  Those who climbed to the lookout had great views of the local farming land and, the salt and freshwater lakes.  Some were lucky to see Peregrine Falcons playing in the thermals.  Others looked around the low open forest dominated by Long-leaved Box and Brown Stringybark with  a colourful understorey of Calytrix tetragona (Fringe Mrytle), Stypandra glauca (Nodding Blue-lily), and Hibbertia sericea (Silky Guinea-flower).  A number of orchids were found including Purple-beard Orchid, Small Gnat Orchid, Pink Fingers, Leopard Orchids and Mantis Spider Orchids.  Common birds in the area were the White-eared and Spiny-cheeked Honeyeaters.

A short stop at the Bluff Picnic Area and Lookout provided another opportunity, for those unable to climb to the first lookout, to look out over Mitre Rock and the lakes.

Heading back down from the summit, a longer stop was taken at the Nature Walk traversing strolling through woodland dominated by Yellow Gum, Peppermint Box, Grey Box with understorey of Acacias, Astrolomas, Brachylomas and Hibbertias.  Mantis Spider Orchids were plentiful along with some Pink Fingers and a solitary Common Onion-orchid in the car park.  The main birds in this area were White-plumed and New Holland  Honeyeaters, Red Wattlebirds and flocks of White-browed Babblers.

Lunch was taken at Centenary Park Picnic Area.  The highlight for those on the Saturday outing was a family of 3 Tawny Frogmouths sitting in a nearby tree watching us, watching them.

The afternoon session commenced with a drive along the Golf Links Rd looking at the vegetation along the roadsides.  Driving back into the Park we had a lengthy stop at the dam to look at the surrounds.  Plants of interest were Eutaxia microphylla var microphylla (Small-leaf Eutaxia), Pultenaea laxiflora (Loose-flower Bush-pea), Caesia calliantha (Blue Grass-Lily) and a profusion of Mantis Spider Orchids.  A highlight for the Saturday group was a sighting of an owlet nightjar.  For the Sunday group, Salmon and Spotted Sun Orchids were seen.

Continuing along the track into the open scrub, the area was dominated by various mallee eucalypts with Broom Honey-myrtle as the main understorey, other plants of interest were Daviesia pectinata (Barb-wire Bush), the red fruit of the Santalum accumulatum (Sweet Quandong), Goodenia benthamiana (Small-leaf Goodenia), and Stackhousia aspericocca (Rough Candles).

A turn into McClures Rd took us along the western side of the mount to the Major Mitchell Cairn (commemorating the site of Major Mitchell’s camp in 1836) where Acacia rupicola (Rock Wattle) was just coming into flower.

The excursion continued with a few more stops looking at other plants of interest including the rare Prostanthera arapilensis (Spiny Mintbush), Scaevola aemula (Fairy Fan Flower) and Pittosporum angustifolium (Weeping Pittosporum formerly Pittosporum phyllirayoides).  Just before returning to the Little Desert Lodge, the Sunday group was able to watch a pair of Restless flycatchers on their nest, a pair of Dusky Woodswallows at their nest with a good sighting of a Mistletoebird. 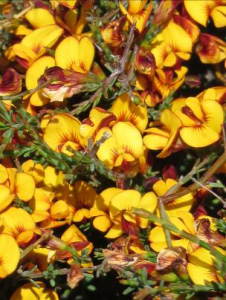 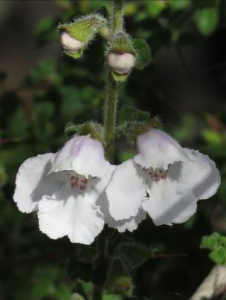 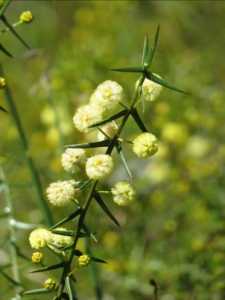