There was two excursions to the reserve. The leader was Joan Edwards (Semmens).

The Lucky Mine Lookout.
The first stop was to the Lucky Mine lookout, which gives views over the Alexandra township and the surrounding countryside.

Geology.East of the Goulburn Valley Highway to Thornton the country is composed of Upper Devonian Volcanics. This rock is crystalline and finely grained. It is very resistant to erosion so the hills stand up high above the flat flood plain of the Goulburn River. In contrast, the Lower Devonian sediments of the country around Alexandra and Eildon are softer and erode more easily.

Mining.In 1865 most of the district’s gold was found in this part of Alexandra. By 1866 miners were concentrating on alluvial mining along the UT Creek. Most of the tree cover was removed and some of the hills are still sparsely treed.

History of the Reserve.The reserve is part of the Run of Donald McKenzie, who was an early pioneer squatter in the district. The land was not made a reserve until the 1970s. Prior to this it was grazed by cattle. Since then a variety of eucalypts have regenerated, including most of the boxes and peppermints. The understorey now has a wide variety of wildflowers and native grasses. There are also some weeds and invasive grasses. The area was burnt in the 1969 fires which stimulated growth.

Geology.The reserve and surrounds are on the Wilson Shale Formation of Lower Devonian age. The shale contain our earliest land plants (Baragwanathia longifolia) and the youngest graptolite in Victoria (Monograptis thomasi thomasi) seen in various locations around Alexandra.

For more information.Joan Edwards (Semmens) has spent 15 years studying the plants of McKenzie Reserve. For a detailed account of the flora, consult her book “Bush Seasons – an affectionate study of a tiny bushland.”

Some of the plants seen.

The walk was much enjoyed despite the hot weather. 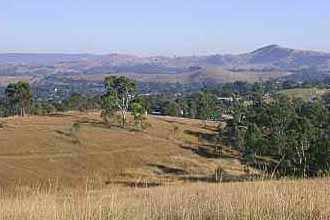 Alexandra from Lucky Mine lookout. 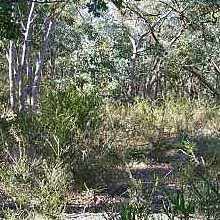 Bushland with dense understorey of wattles. 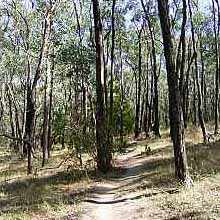 Box/Stringbark with grassy understorey. The reserve has a varied treee cover and varied understorey. 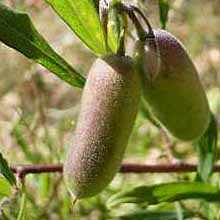 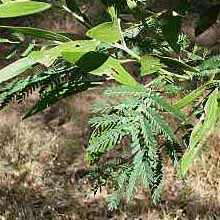