Leaders were Maureen and Bruce Hawkins.

The walk descends in to a gully with increasing soil depth and moisture. Vegetation changes from tall open-forest to warm temperate rainforest as you go down the slope. The dominant species in the tall open-forest are Silvertop Ash, Yellow Stringybark, Messmate and Mountain Grey Gum. One of the trees above was labeled Monkey Gum! Fortunately the scientific name of E cypellocarpa was included. In NSW this species is known as Monkey gum because the “Monkey Bear” (Koala) feeds on its leaves. This is a good example of the danger of using common names that only have currency in a localized area.

Many of the trees and shrubs are named and the signs often include interesting information about the plants. Blue Olive-berry has a round blue fruit. Lilly-pilly produces edible fruits which can be used to make jams and chutney. Sweet Pittosporum grows here naturally but is often a weed in Western Victoria. Its wood is tough and closely grained which makes it suitable for carving golf club heads. Three species of tree-fern were growing adjacent to each other along the trickling creek – Soft Tree-fern, Rough Tree-fern Cyathea australis and Prickly Tree-fern. Pinkwood or Eastern Leatherwood has shining dark-green pinnate leaves and deep pink timber. Bolwarra has thick leaves and a succulent fruit similar to a rosehip.

Birds were easier to hear than see in the dense rainforest. Grey Shrike-thrush, Golden Whistler and Fantail Cuckoo were heard. Lyrebird feathers were scattered in a patch – probably the result of a predator attack. A Pilotbird with its Rufous crown scratched in the ground litter.

Mallacoota Lookout is 300 metres above sea level on a high ridge just north of the border. Some trees have been felled to allow a view across Croajingolong National Park to Mallacoota over 25km in the distance. Plants flowering around the lookout included Handsome Flat-pea, Snowy Daisy-bush, Australian Clematis and Round-leaved Mint-bush. 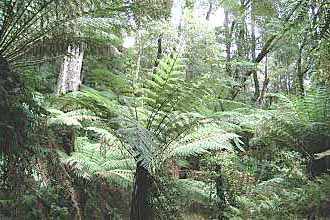