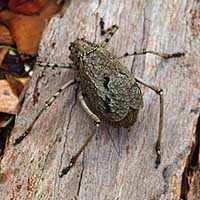 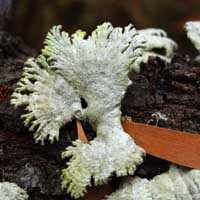 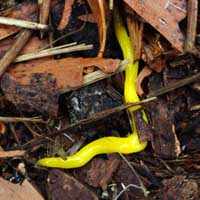 1. A native Katydid Acripeza reticulata .This is the female and is flightless. The male was found later towards the end of the lava canal walk. Its is longer, slender, and has long wings. Insects of Australia declares that it is widespread in South-eastern Australia. It is usually seen in alpine areas where it is commonly found in Summer.

2. Splitgill fungus Schizophyllum commune . This is the fungus which we saw growing on a dead acacia early in the walk along the lava canal at Mt Eccles. The Fungimap book warns ‘CAUTION – DO NOT SMELL’ because “…..Splitgill spores may be pathogenic and cause the disease basidioneuromycosis.” “That was new to me especially after getting so close to take its photo!”

3. One of the yellow flat-worms we came across on the lava canal walk, in/under/amongst moist leaves and bark and in danger of becoming even flatter from walking boots.

Contributed, with photos, by Rod Orr.