Location: Driving west from the city centre, turn right into Pleasant Street and continue to the lake foreshore. Wendouree Parade circles the lake. Drive to the west end of the lake and the botanic gardens, where there is ample parking.

Plants. Most of the trees around the lake are introduced willows, pines, oaks
and elms. There are a few indigenous blackwoods.

83 native plant species have been recorded for the lake area. The most conspicuous of these are the Tall Spike-rush which forms large beds in Fairyland (the north-west part of the lake), and Common Spike-rush, which grows near the water’s edge.

Birds. For easy viewing of water birds, Lake Wendouree would have to be one of the best places in Victoria. Some of the birds that are seen atmost times of the year include

Clamerous Reed Warbler, Sacred Kingfisher, Great Crested Grebe and Little Grassbird have all been recorded as breeding on the lake.

Mammals. Brush-tailed Possum is the most common mammal. Water Rats are often seen along the water’s edge in Fairyland.

History. During the goldrush the lake was known as Yuille’s Swamp, named after William Yuille who had a sheep-holding paddock in the vicinity. In 1852 the swamp outlet was dammed to provide a water supply for the growing population.

In drought years the lake may dry up completely. Only a small amount of water is needed to attract water birds. 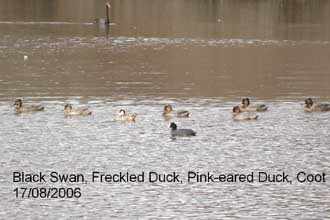 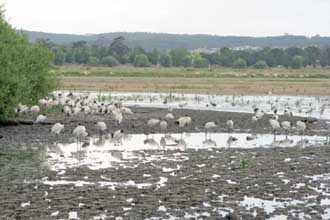