Gobur Flora and Fauna Reserve is at the southern edge of the Strathbogie Ranges. We followed the track that leads SSW to the southern fence.

The Eucalypts. The reserve is at the boundary of the river flats and the granite Strathbogie ranges. Long-leaf Box, Grey Box and Red Stringybark are common in the drier parts. Southern Blue Gum, Peppermint and Swamp Gum grow in the damper areas. Yellow Box was also abundant. Many of these had smooth, gum-like bark.

The Mistletoes. Box Mistletoe is abundant in the surrounding paddocks. It grows on the box and stringybarks. Drooping Mistletoe grows on Peppermint, Bluegum and Silver Wattle.

Wasp and spider. A yellow and black wasp was observed pulling a large Huntsman Spider. The wasp was moving backwards, pulling the paralysed spider by the head. It crossed the track, climbed over a fallen log, and then through and over many clumps of grass tussocks. Eventually it stopped, apparently through exhaustion. After a while, it left the spider and took to flight. It returned to the spider, and pulled the spider into its hole. The total distance travelled was about 35 metres.

In flower. There were few plants in flower. However, flowers were found on an prickly egg and bacon. It was identified to be Dillwynia juniperina.

Birds were abundant. One interesting sighting was of a Wedge-tailed Eagle being harassed by a Brown Goshawmk.

The reserve is an interesting area. Many of the group will want to come back in spring. Thanks to Bob Tate for his leadership. 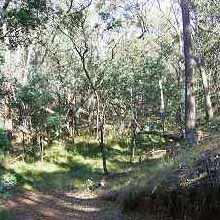 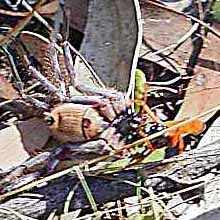 Small valley. The soil is deeper and damper, and supports green grass and herbs.