The leader was Noel Schleigher.

Cliff top above Secret Beach. Noel pointed out the nature of the top soil, being whitish sand called Parna which he said was blown there during the last ice age. Below this was reddish soil coloured by iron oxide which he said was characteristic of a warm and wet climate as it was in Gondwana some 70 million years ago, before Australia broke away. The reddish soil is common in much of Australia particularly in the north west

Secret Beach. The beach is some 10 to 15 metres below the cliff top. The big advantage of beach cliffs is that one can see the ‘end view’ of the earth with its shapes and nature. For example anticlines (tops of curves in rocks) and their opposites – synclines or valleys, which are a characteristic of folding. This can be illustrated by applying pressure to both ends of a flat sheet of paper. The other common feature of the earth is that of faults in rock caused by a section moving up or down or even sliding over another.

The rocks on the beach were quite large and spectacular formations of layered sandstone and some of mudstone of Devonian time, i.e. about 360 to 418 million years ago. From their distorted shapes, including some vertical strata it gave the appearance of very strong earth movement. One could not help thinking of the massive distortion in the earthquake of Pakistan. It was noted that cracks in the rocks were filled with visible quartz or hydro-thermal solutions which had been forced in them.

Noel then told us of a major geology feature that much of Victoria in past times had been subject to enormous East-West pressure which caused North-South folding. Hypothetically, if such folding could be straightened, the width of the land would be very much greater.

Quarry Beach Further features were shown such as honeycomb rocks or Tafoni, also holes in horizontal rocks caused by pebbles being circulated by water. Noel pointed out that the normal North -South line of most of the folds sometimes had a kink or change of direction probably caused by some additional N-S plate collision at a later period. 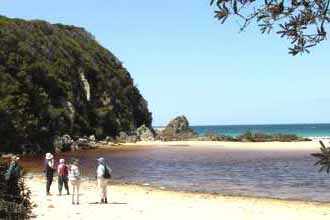