After very low rainfall in February, March and April, this was the driest foray we have ever experienced in this area, which is usually bristling with fungi at this time of year. However, the dozen or so enthusiasts from the FNCV Fungi Group and SEANA were pleasantly surprised to discover that a few fungi were present – and some, such as the Rooting Shank Oudemansiella gigaspora, were fairly fresh in appearance.

Areas examined were the car park and picnic area, and the gully at the bottom of the hill. Near the car park, a pile of horse dung at the base of a tree was home to a species of Coprinopsis, while an investigation of nearby eucalypts and forest litter revealed Clitocybula ‘streaky yellow’, Conocybe filaris, several Lycoperdon fruit-bodies, and a small grey-brown Entoloma with a convex pileus and a small papillate umbo. Introduced fungi that grow with (are mycorrhizal with) conifers included Inocybe sindonia and some rather dried up Hebeloma testaceum.

In the grassed area we found a good specimen of Macrolepiota clelandii, and also a group of Rhodocybe sp. growing near a large Blackwood Acacia melanoxylon at the edge of the forest. Further into the gully, growing on fallen dead wood, were Bisporella sulfurina, Phlebia subceracea, and two Crepidotus species (one orange all over and the other creamy white, with light orange lamellae that had a darker orange edge). Fragile Psathyrella and Lepiota species were scattered on the ground.

Thank you to all the foray participants for making the day both enjoyable and productive, and special thanks to Carol Page, who organised this event and compiled the species list. 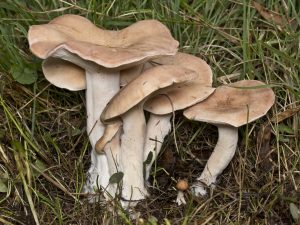 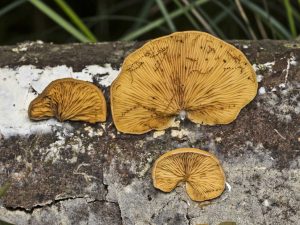