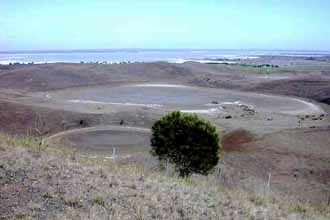 Looking west from Red Rock, across two maar craters to the much larger Lake Coranganmite.

Marr craters form as a result of an explosion which occurs when underground water is vaporised by molten rock below the surface. The small particles of rock (ash) fall down to form a layers of ash, called tuff.

The iron minerals in the scoria at Red Rock has oxidised, colouring the rock red.