Effect of fire on the Landscape – Jerusalem Creek

The leader was Dr Kevin Tolhurst, Senior Lecturer in Fire Ecology and Management, University of Melbourne.

This excursion was to investigate the impact of fire in the area of a prescribed burn by Parks Vic. It is a dry sclerophyll area of predominantly Box eucalypts. The site was just up from the Jerusalem Creek boat ramp and was burnt about 12 months ago.

We only wa1ked about 40 metres into the forest but found numerous examples of how the fire had impacted on the vegetation and were shown what to look for in gauging fire intensity.

Contrasting unburnt with the burnt site, we noticed more twiggy and leafy material. 20% moisture is needed for breakdown of leaf litter. During the 1983 drought there was twice the litter level.

We ran out of time to see a second site of gum eucalypts and could have asked questions for hours – perhaps days. Just in time for a sidetrack to Mt Piniger Lookout for a view down to the new wall and the busy lake. Also views to the burnt peak of Mt Torbreck and the folds of eucalypts on the nearer hills.

A hot afternoon in the bush but a facinating one and we learnt a lot. Many thanks to Kevin for sharing his knowledge. 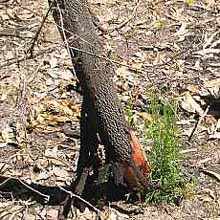 Cherry Ballart has been ringbarked by the fire. The bark at the base has peeled away from the trunk.Despite the ringbarking, the tree has put out new leaves in the crown. Cherry Ballart is a root parasite, and is obtaining nutrients for the roots from the nearby host plants. The tree is also producing suckers at the base. 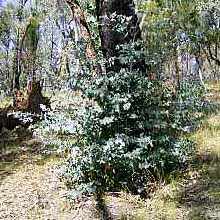 Dense suckers at the base of a Long-leaf Box. 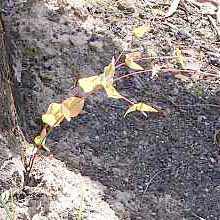 Sucker at the base of a Peppermint. 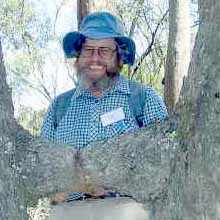 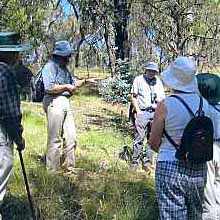