Cockatoo Lake and The Gap Excursion

To Cockatoo Lake. The excursion travelled along minor roads north of Naracoorte over low ranges separated by cleared flats with large Red Gums. The sandy and limestone ridges supported stringybark woodland with wattle and sheoak understorey. The view westward from the edge of the Naracoorte Range looked over a vast, flat plain with many green patches of irrigated lucerne grown for hay and seed. Several Wedge-tailed Eagles were seen while travelling and a pair of Red-tailed Black Cockatoos flew along side of the road on the east side of the range.

Cockatoo Lake is a popular swimming and yabbying spot when filled with water, but is now dry and covered with a dense crop of thistles. It is ringed by Red Gums and lignum bushes. A pair of Little Eagles soared over the lake along with a high flying White-faced Heron. Cockatoo Lake is aptly named as we observed Sulphur-crested Cockatoos, Long-billed Corellas and Galahs flying around. A pair of Musk Lorikeets were investigating a red gum hollow. From another hollow the grunts of a Brush-tailed Possum were heard.

The Gap. Leaving Cockatoo Lake we followed the Morambro Creek eastwards. The creek brings water to the lake from over the Victorian border. Morambro Creek has cut through the Naracoorte Range to form The Gap. The harder limestone on the northern side of The Gap was quarried for road making material. The cliff bordering the northern edge of the quarry provided a site for Fairy Martins to build their bottle-shaped mud nests and a white-washed ledge looked like it had been used as a nest site by Peregrine Falcon.

A patch of stringybark timber was the most diverse botanical area for the day. Silver Banksia and Common Correa were flowering. Flame Heath and Leafless Currant-bush were in bud. The area had not been burnt for many years and the Austral Grass-trees had a skirt up to 2 metres high. It would be an oasis in spring.

The last stop was the cutting into the limestone at the rear of Woolworths car park. Solution pipes up to 1 metre in diameter could be seen where percolating water had dissolved the rock.

Thanks to Elspeth for leading a carefully planned excursion through a variety of habitat and sites of interest. 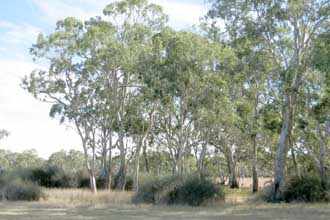 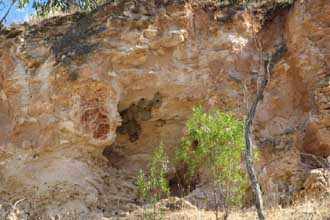 3. Fairy Martin nests at The Gap.