The morning was spent at the Bald Hill Reserve, about 6km east of Kyneton. The reserve is owned by the Macedon Ranges Shire and comprises 96-hectares of forest, woodland and grassland with a rich diversity of indigenous flora and fauna including state and nationally significant species. The President of the Friends of Bald Hill Reserve, Carolyn Robb, lead the group of 19 on a loop walk around the reserve, explaining the group’s activities in fauna monitoring, weed management, and encouraging the public to appreciate the natural significance of the reserve. We started across the grassland past a pond with frogs calling and many large rafts of frog spawn. Then we moved up through a Peppermint forest to a granitic outcrop and finally to the foot of the basaltic volcanic cone of Bald Hill. Spring comes a bit later to this cooler area, so only the leaves of sun-orchids were showing. But the birds were calling and many other plants caught the group’s interest. Of special delight to Carolyn and her group was the sighting of a very healthy looking Koala, not seen in the reserve for several years. Another highlight was a pair of Silky Hairstreak butterflies that were staying close to their main food plant, Acacia melanoxylon, Blackwood. In spite of their orange and black colour these butterflies are a member of the blue butterfly family and like most members of this family have an association with ants that attend the growing larvae. 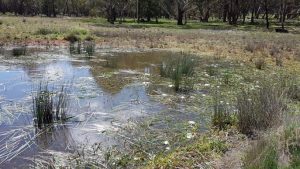 Pond with rafts of frog spawn 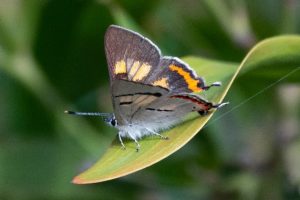 After lunch at the historic South Kyneton Mineral Springs reserve, the group spent the afternoon in the Fryers Ridge NCR. A pleasant walk birdwatching along the Coliban water channel was interrupted by the sighting of a Tiger Snake down near the water. Birding highlights were a pair of White-winged Trillers, a small group of Varied Sittellas and there were several cuckoo species calling. It was then a short walk up through the bush to the Humbolt Track and back to the cars. Again, the orchids were only just beginning to show, with leaves and a few flowers of several species seen. Other flowers were scarce although close to the cars there were a number of pea flowers and the heath, Leucopogon fletcheri, in flower. There were also several wattles in flower along the track including Acacia pravissima, Ovens Wattle, which is not native to this area. 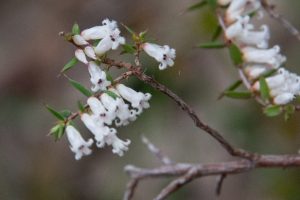 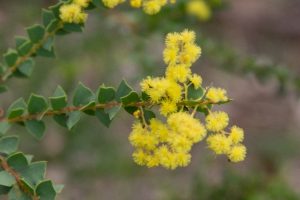