A visit to Kennedys Creek 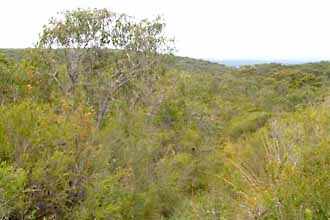 Dense vegetation at Kennedys Creek. The tree is Broad-leaf Peppermint and Button Grass is in the right foreground. Although called “button grass” it is a sedge. Button Grass is much more abundant in Tasmania. 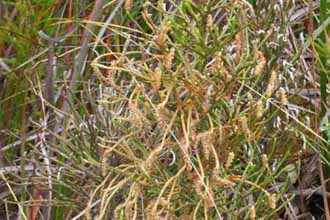 Club Mosses are an ancient group of plants with a fossil history extending back to the Paleozoic. In the Carboniferous Period some representatives were tree sized.

After lunch on Sunday a long convoy of about 14 vehicles took off for Kennedy’s Creek. The lure of the orchid is strong and cannot be denied.Our destination was a disused sandpit in the Otways State Forest some 17 km south of Simpson.We were met by our enthusiastic and knowledgeable guide, Kylie Treble,who showed us some of the botanical highlights of the area.

The first orchids were fine specimens of Horned Orchid (Orthoceras strictum). Most had finished but luckily there were some still in flower for those of us who had not previously seen them. Near a patch of Swamp Heath we were shown two species of Midge Orchid, the Green (Genoplesium pumilum) and the Bearded (G.morrisii). Another member of this genus was seen later and provisionally identified as the Variable Midge Orchid (G. archeri). A small patch of onion orchids was spotted by a keen eyed botanist.With many spent seed pods of Rabbit Ears (Thelymitra antennifera ) and a beard orchid also seen, the orchid nuts were well satisfied.