The walk to the weir took longer than expected with participants keenly interested in locating the elusive small birds hiding in the dense bush. Although there wasn’t much in flower, a few fungi were to be found. Lyrebirds were calling from the surrounding bush, adding to the already numerous birds calling.

Tree ferns at the weir provided a lot of interest, some covered with Filmy Fern and others with Helmet Orchid leaves on the trunks (the orchids having already flowered in autumn). The tall thick trunks of the tree ferns were rising from the forest floor with rosettes of new growth springing from the top. The tan colour of the croziers contrasted with the bright green of the fronds.

A few members of the group were lucky enough to spot a Rose Robin flitting around the weir area.

The return walk was just as interesting, again fungi and ferns featuring highly. At the top of the steps under the tree ferns, a large colony of Ramaria filicicola provided a talking point and photographic challenge. The population of Austral King-fern (Todea barbara) along the track was of considerable interest to participants as well as lush plants of Strap Water-fern (Blechnum patersonii). On the embankments, the colonies of the Giant Moss (Dawsonia longiseta) provided yet another highlight.

Birds were quite plentiful with Golden Whistlers, Lewin’s Honeyeaters, King Parrots and Gang Gangs among the sightings. For the morning walk, 23 birds were sighted. 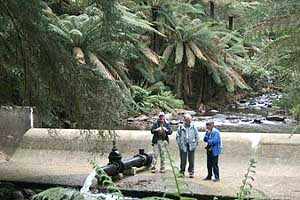